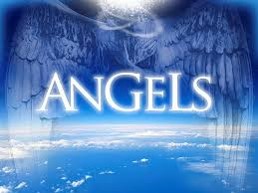 They are supernatural beings created by God and for God’s glory.

Angels often give you direction.

“But after he had considered this, an angel of the Lord appeared to him in a dream and said, “Joseph son of David, do not be afraid to take Mary home as your wife, because what is conceived in her is from the Holy Spirit.”
Matthew 1:20

“Balaam got up in the morning, saddled his donkey and went with the Moabite officials. 22 But God was very angry when he went, and the angel of the Lord stood in the road to oppose him. Balaam was riding on his donkey, and his two servants were with him. 23 When the donkey saw the angel of the Lord standing in the road with a drawn sword in his hand, it turned off the road into a field.”
Numbers 22:21-23a

They can minister God’s love and healing and power to you.

“Are not all angels ministering spirits sent to serve those who will inherit salvation?”
Hebrews 1:14

“An angel from heaven appeared to him and strengthened him.”
Luke 22:43

We fight from a position of strength!

YOU ARE THE VICTOR!